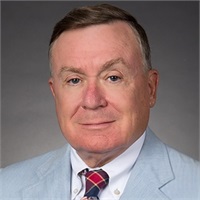 Edward Bush has more than 40 years of experience in the financial services industry and specializes in building portfolios for individual investors through the use of municipal bonds, blue chip common stocks and advisory managed accounts. Prior to joining Dorsey & Company in 1989, Edward was affiliated with Howard, Weil, Labouisse, Friedrichs, Inc. In 2012 and 2013, he was honored as a “Money Maker” by New Orleans City Business magazine. He has successfully completed SEC/FINRA/NSAA exams to attain the following registrations:

A graduate of Tulane University with a B.A. in History, Edward was elected to membership in Phi Alpha Theta and Omicron Delta Kappa. He also completed graduate work at Tulane in Business and Liberal Arts. Edward is involved in various civic activities and has served on the Boards of the Metropolitan Crime Commission, the New Orleans Board of Trade and the Economic Development Advisory Committee of the City of New Orleans. He is past Chairman of the Advisory Board of the Greater New Orleans Command of the Salvation Army and past President of the Board of the Synod of the Sun Presbyterian Foundation. He is Past Chairman of the New Orleans Council of the Chamber and a former Secretary of its Board of Directors and was President Pro Tempore and a Commissioner of the New Orleans Public Belt Railroad.